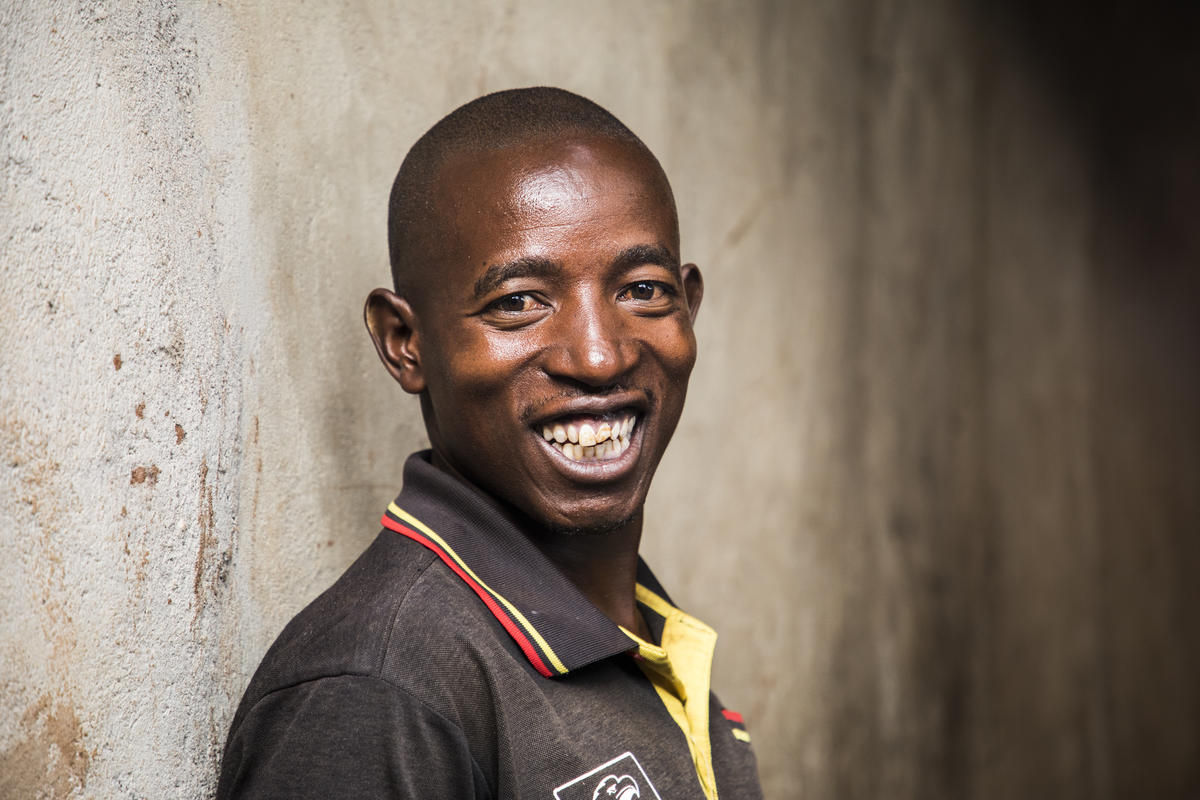 When deadly violence threatened his village in 2012, Valens took immediate action to save the lives of his wife and children.

“I found out that my brother, who has looking after his livestock, was abducted by one of the militias. That’s the day we decided to flee,” he explains.

With danger closing in, there was no time to take anything from home, except a five-liter jug of water. Escaping in the middle of the night to try and avoid armed forces, his wife carried their newborn baby and Valens walked with their three-year-old son on his back.

Leaving behind the only home they’d ever known, Valens led his family toward a nearby town where he thought he could find relatives, and shelter.

But they found no one.

“When we reached the town, we found it was empty – deserted,” he says. “So, we decided we needed to go further, to Uganda.”

At that time, fighting between two rival armed groups raged across much of the province, blocking the most direct routes to the Ugandan border. Valens and his family took a longer, safer road, continuing to walk at night to avoid danger.

“Upon crossing the border, we were asked to wait, then a vehicle came to get us and take us to a Transit Centre, where we received shelter and assured we were safe,” Valens explains. “UNHCR gave us hot meals. We all let out a sigh of relief to know we were out of danger.”

Valens’s family spent about a week at the transit centre, meeting and sharing stories with other refugees. Together, they boarded UNHCR buses, which took them more than 300 kilometres to a Refugee Settlement. There, UNHCR assigned Valens’s family a plot of land, shelter materials, blankets, mats, food and tools to farm the land.

To provide for his family, Valens began to strategize future plans right away: he would plant corn to feed his household, but sell the surplus and save some money. With those funds, he would buy a few chickens and start a poultry business, selling eggs to other families in the settlement. And, with that income, he would reclaim the profession that he’d lost when he was forced to flee.

“I planted corn for three years. I started earning a little, which gave me capital to buy equipment to start my business,” he says. “I knew I needed some savings to start a veterinary business. That’s why I decided to venture from farming to poultry. UNHCR and its partners gave me training on how to raise chickens.”

Valens and his family started with 20 chickens. After raising and selling them, he was able to increase their flock to 200. Little by little, working together, they reached 600 chickens and started earning enough to support their household – and open a veterinary shop.

Today, according to Valens, “life is now changing from bad to good.” His family follows a daily routine that makes each of them feel happy.

“When we wake up, we pray, send the children to school, then start our work,” he explains. “We tend to our garden, then I go do my veterinary work around the settlement.”

As proud as he is of his family’s business, he’s even prouder of his children’s success in school.

“When we see the children going to school, we know there will be a difference,” Valens says. “I am happy because the future is bright for my children with the education they are getting now.”

When asked about what advice he would offer to fathers around the world, Valens thinks for a moment, then smiles and speaks.

“My advice to the men out there is to love your families and work hard,” he explains. “Whether good times or bad times, love one another and persist through all challenges.”